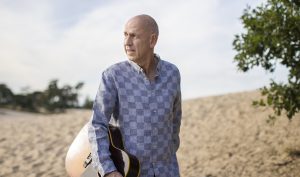 On ‘The Lonely Coyote’ every guitar tells a story. The whispers of a gentle poem in your ear, the scream of a heartfelt drama, and in each of them Marc van Vugt’s guitar speaks with its own voice. Acoustic guitar music in the tradition of Bill Connors, Ralph Towner, Pat Metheny and Egberto Gismonti.

“My love for guitar started when I was 11 years old and heard the first chord of ‘A Hard Day’s Night’. I was mesmerized by what I heard and was completely absorbed by that sound. At that moment I knew that this was what I wanted to do for the rest of my life.

I love writing for large ensembles, choirs and orchestras. Although the guitar has always been a big part of this, it was never the absolute center of my projects. For ‘The Lonely Coyote’ I decided to strip down my music to just me and my guitar. Not just one guitar: each song is played on a different acoustic guitar with its own sound and its own voice. Each telling a different story, whispering in your ear or at times screaming of emotions.”

Special thanks to
Ineke Vandoorn for your love, artistic inspiration and help in realizing this album. Sander van Herk for your artistic vision and the great afternoons we spent mixing and mastering.